Lessons for life: I have learned from Africa

Lessons for life: I have learned from Africa

« Who are at the other side of the sea » I used to ask the elders in my village, which is located at the seaside. « There are black people whose noses are long and who eat humans alive” they used to respond. Their response (which is not true) though horrifying made me realise a kind of single story they have of the people in the other part of the world especially of Africa. The single violent story of Africa that I carried from my childhood changed into a story of love and peace when I landed in Africa two years back, in Cameroon and in Central Africa Repbulic. Yes, the single story turned into multiple stories. Here are some stories:

Though poor, the people of Central African Republic have hearts which are rich and generous. Their generosity is shown in their hospitality towards the foreigners. Immense is their joy when they see a foreigner in their land. The children jump and dance to welcome them. And the elders welcome them with wide open arms. They never fail to learn from the other cultures. Be it the dress, film, music and dance, and ideology they have a touch of many other cultures and traditions.  The way they appreciate the other cultures and integrate the good things from other cultures made me to question why we Indians have a culture which is closed and reserved (at least in some aspects).

Freedom of women is another thing that I very much admired in Central Africa Republic and in Cameroon. Women are free to roam in the streets at any time without being harassed by men. Unlike India where seeing a woman in a Bar suffice to make a headline in our dailies, women equally to men flock the bars and relax after the tiring work. During the time of marriages these are not women who give dowry to men but men do. Had it been in Indian we would have killed many male child in their infancy!

Celebration of life and death

Without any doubt Africans are people of celebration. There is life and energy in the continent. How the colonizers and the political leaders used this energy to their self-interest is another story. The domination of Africans in the world of sport and music bears witness to the flow of youth energy in Africa. Celebration is part and parcel of their life. They celebrate life. Music and Africans are like flesh and nail. Little children dancing on the streets is a normal spectacle in Africa like children playing on the streets in our country. Any special occasion, dance and music are inescapable. They not only celebrate life but also death. Farewell to the departed soul longs about three days normally, and in some cases one week. Relatives and friends throng the bereaved family. There again they sing and dance, primarily to make the members of the family forget the loss of their dear ones and finally to celebrate the entry of the departed into heaven. Thus they not only celebrate life but also death.

Gifted with a green environment and not being corrupted by the modern technology people in Central Africa Republic live a life that is well knitted with nature. While people around the world hurt mother earth by deforestation, it here in this part of Africa, I think mother earth finds solation.  People in the villages do not cut the trees but for the little domestic purposes. Ancestral worship is strong that people see their ancestors in nature. Destroying the nature is like destroying their ancestry and their past.  But Alas, evils have come in the form of foreign traders (traffickers) who trade the years old trees for meagre amount leaving the natives poorer.

Ubuntu is more than just a philosophy. Ubuntu is a way of life and it simply translates “I am because we are”. Although the word Ubuntu comes from southern Africa, the concept of Ubuntu is universal throughout Africa under various names. The concept is very strong in Cameroon and in Central Africa Republic. ‘Us’ has greater importance than ‘I’. Community plays a pivotal role in all things before the individual person. That is why all their celebrations and activities are community based. In all their decision making people value the words of the elders, the community leaders. Finally all the above mentioned stories like openness, celebration of life and death and they being one with nature find their roots in UBUNTU.

All throughout my stay in Africa I wished to have a conversation with an African who is not theist. Rarely could I find somebody. Their faith in God is so strong that they can never deny the existence of God. I have witnessed that during my regular visit to the refugee camps. Though they have not eaten well for a couple of days they always say that by the grace of God they are well, when we enquire about their life condition. Priests and especially the Bishops are celebrated like the kings. This reminds me of the era when the Church had special privileges in the European regimes.  True that the Church is highly looked upon by the people. At the same time, the question that babbles me is “Why the church has not used its influence to redress the political conflicts that the continent is surviving ever since the colonizers left the continent?”

Maria Valan is a Jesuit scholastic

from India who is doing his regency in JRS, WAF.

He has done his masters in Philosophy.

Politics of Africa and Middle-East are his fleld of research. 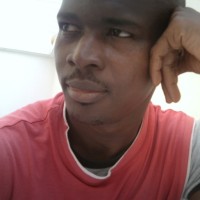